A couple of years ago my inner voice advised me I would change my life and a friend would lead me to that change. It was supposed to make everything different. I could not for the life of me imagine how this person would be able to do that, but I listened and sought to find this great inspiration. Most people don’t get me. I have often been called the red pill in the Movie the Matrix. The reference always meant it was just too complicated and it was easier to be the blue pill and play along like everything is all right. That isn’t how this ducky rolls. I have a little chihuahua named Stuey. He was born here. It’s a long story and really it doesn’t matter why he ended up here. What matters is that inspirational friend always said I was just a yapping chihuahua barking at your heels, refusing to shut up. I then asked myself, “Why doesn’t that little dog just shut up?” He has no real strength. No one listens to the little guy, but damn, he sure is tenacious. Then I realized, from small voices may come great change. This is what I hope to achieve in the near future through products and other resources. They say if good people do nothing when there is an injustice than nothing will change. We don’t like to have ugly pointed out. We don’t want to talk about animal abuse or dog fighting rings, or just stupid people who neglect their animal. But, if the Yapping Chihuahua has anything to say about it, we will talk and we will do. 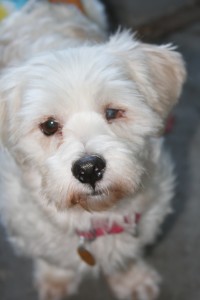 Rescued from OCAS / Orange County services. His owner died, he and his mates were taken to a very high kill shelter. Two rescues passed him up because he was aggressive. Well, no one read the papers and his hair was long. He was blind in one eye and everyone was scaring him. On top of that they kept saying his name wrong. They pronounced it Rado with a long A instead of in Spanish. He was name Rado (Or possibly Raro which means rare.)  We now call him Budders. As I write this he awakens from a bad dream. I give him a big kiss. He is safe.