Thanks to the ADA (Americans with disabilities act) Many citizens have the legal right to have a service animal present with them. We probably all remember seeing the random person with a large seeing eye dog and nowadays we know that animals serve as not only companion animals but also animals who can sniff out illness and provide other services.

What most people, especially the ignorant, don’t understand about this law is that many people who do abuse it only do so because they can. Yes, people will try to sneak a dog on a plane and supersede the rules. Maybe he doesn’t want to pay, maybe he doesn’t want his dog to travel in cargo. Depending on the airline, getting on a plane with a service animal does require some kind of medical proof. However, it is the misinterpretation of many retailers that there is some kind of registry out there that is the official place of these kinds of pets. What they don’t realize is that anyone can order an official looking pack of goodies and look like Momma is crazy enough to need her little pumpkin with her at all times. 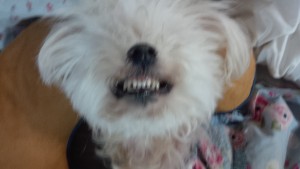 I recently boarded a couple of planes with my little anxiety dog. Her name is Sophie. Sophie has no training to be a companion animal. I rescued her from her owner’s will  instructions designating she be put down. Sophie, then, a pretty little white Maltese, won my heart. No one seemed interested in an older dog, so I claimed her. No other dog has given me the attention she has. I learned very quickly that she has grooming and touch anxiety. Who previous owner must have groomed her too much. She will do anything to keep from being touched and I learned that being chomped on by tiny front teeth repeatedly hurt more than child birth. At this realization I found myself fighting with the urge to drown her immediately or fake a car accident out front. After a couple of years, I purchased a muzzle but she anticipates my placement on her snuzz and she will bite anything she can before I get it on her. I had several strange marks on my leg and one really weird one on my fat stomach. Oh, yeah, Sophie got me.

Sophie has a lovely little cradle next to by bed. Since I’ve rescued so many animals, she has a special place because, now thirteen, she doesn’t move fast and I have an enormously stupid lab/ hound mix who steps on anything in his path like a modern day godzilla 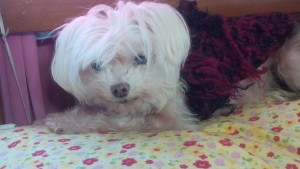 . So, nestled in her cradle amidst the faux leopard coat and the very real mink stole from an auction, she has little toys to rest her head and dream peacefully…. Peacefully until the next time she can try to bite me that is.

I have taken Sophie into stores frequently. Having invented my own carrier (patent pending) I have a great way to take her with me and try to advert trouble. But every now and then, someone will make the stupid personal judgement to bother me anyway.I should note that I also have a pit bull service dog who does provide arthritis services. She helps me stand up. I can take her to the beach wearing a vest and have almost no issues at all and Baby Girl’s pit ancestry  defies this. I have had customers approach me and tell me I can’t have my dog in a store. I have had management tell me this. I do my best to go about my business and leave people alone, but think about it, people. If you have a doctor (two in my case) who understand I need my dogs for my mental and physical health, why do I need some sorry person to tell me I don’t? And, if in the event I am clutching a little white dog and I tell you it’s for anxiety, doesn’t it make sense to leave me alone? One manager went to far as to argue with me over the laws and demanded I show her proof. Well, I didn’t and I don’t have to, but what does need to happen is a sense of decency if you don’t understand someone’s handicap. I shouldn’t have to be placed in the very stressful situation of defending my little white dog in a bag who only seeks to hurt me. When she is in a public place, I’m her best friend. It’s quite the dirty white lies she tells.

I do  have a label on one of my bags. It says. “We are nuts”. I found that the airplane ride to Buffalo may record in my passages as the easiest and least stressful. I have flown many times and never realized that i did feel badly until I had that little grinning old lady letting me pet her as long as I didn’t try to groom, or wipe away eye crust, or push back her hair.